Welcome to Tansu Cabinetry. We can be your scholarly source for verifiable Japanese antiques, click here to learn more.

By the authors of TANSU: TRADITIONAL JAPANESE CABINETRY

From the Edo period (1603-1868) well into the Meiji period (1868-1912) there was one category of Tansu cabinetry that maintained absolute continuity in design. Funa Tansu, literally ship chests, were used on small merchant vessels plying the Sea of Japan and the inland sea between Osaka and Hokkaido island. This route, known historically as the Kitamae, was most active from March through November. There is little dispute that these exotic ship Tansu represent a high achievement of joinery and hardware craftsmanship in consort. The reasons for this excellence are rooted both in Japanese feudal history and functional demands that forced Funa Tansu makers to surpass in technique most all Tansu crafted for land use.

With the unification of Japan from 1603 under the Tokugawa Shogun, merchants were encouraged to risk investment, especially in supplying raw materials and food to the new capitol Edo, now Tokyo. In that it served the interests of the Shogunate to control the merchant guilds, free trade was favored and eventually supported by a law in 1623 ordering open trade between the provinces. However, because of its fear of foreign interference in the traditional culture, an enforced closure of the country was imposed in 1633. Further, 1n 1636, a prohibition was decreed against construction of any ship with a keel, more then two masts or a cargo capacity exceeding 2550 bushels. Although the Shogun’s intention was to stifle foreign trade, he inadvertently crippled the transport of rice grown on distant government lands, resulting in shortages and even food riots in some urban areas. The problem was largely alleviated through reforms of the coastal navigation infrastructure and regulations suggested by Kawamura Zuiken in 1670. Among his implemented recommendations was the designation of reliable sea transporters of government rice as “official merchants” representing the interests of Shogunate. As well, he convinced the authorities to allow properly designated vessels to trade for their own account at coastal towns en route. Though certainly an inducement to shipping traders, there was a physical constraint that stood in the way of predictable success. The ships, though impressive in construction, were usually under 90 feet in length, with a scant crew of eleven or less. Coastal townspeople were not always properly impressed when one of these “1000 koku” ships arrived. Further, most of the ships on the Kitamae trade route were smaller then the allowable size because of the cost of ship construction. Being flat bottomed, without a keel, and small, the ships were not well suited for bad weather. The Japan Sea is an uncertain friend at best for those who sail. Therefore, the ship, the men and their accoutrements had to be rigorous.

On board, only the captain and/or shipowner possessed Tansu. Because these two men, or one in a combined role, functioned as commercial agents, buying and selling for their own account, an appearance of status was important. Their tansu, ceremoniously offloaded and carried to the place of business negotiation, were then carefully positioned to most effectively impress any local merchant, thus lending a calculated air of affluence and respectability to the visitor’s aura.

For stability on board, the chests were constructed to achieve maximum weight, density and strength. Zelkova Serrata was always the primary wood for face, top, sides, bottom and structural members. All external joints were covered and reinforced by iron plating of 12mm up to 30mm in thickness. 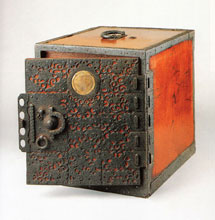 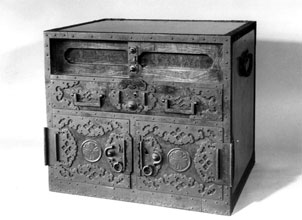 Other Articles
WHAT ARE TANSU?
TRADITIONAL DESIGNS, WOODS and FINISHES
TANSU IN YOUR HOME
TANSU HISTORY
SELECTING A TANSU
CRAFTSMANSHIP
THE PURPOSE AND IMPORTANCE OF HARDWARE
SHIP'S CHESTS - A SUPERB ANOMALY
HOW I CAME TO BUY MY FIRST TANSU
JAPAN: IMPRESSIONS FROM TODAY
Local Seven web consulting © 2022 Tansu Cabinetry. All rights reserved.